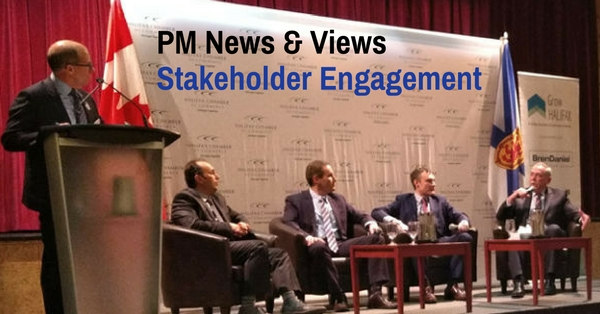 Recently I went to a luncheon hosted by the Halifax Chamber of Commerce, which my company was proud to sponsor. (See our logo on the banner to right of stage above.)

The topic of the luncheon was “What’s Up, Halifax?” and four panelists represented major projects in beautiful Halifax.

What struck me with the questions and answers was the emphasis on stakeholder engagement, not only from resident and business to the government and developers, but also among the city and developers.

From the answers, you could see that communication was obviously good between the city and development representatives. They communicated in front of over 100 people and were willing to answer the audience’s questions and discuss topics among themselves in the open.

It was also heartening to see that both parties were open to further increasing their communication and stakeholder engagement.

According to PMI, a stakeholder is “an individual, group, or organization who may affect, be affected by, or perceive itself to be affected by a decision, activity, or outcome of a project.”

Knowing who the perceived stakeholders are can be the most difficult part of identifying stakeholders.

For the cities and towns we live in, we are all stakeholders, and I know the government is conscientious in my area to seek input from residents and businesses. But there can always be more input and improvement on engagement.

Is that a bad thing? No. Projects are continuously improving all the time, and we should expect that to be so.

Involving stakeholders is a key, and valuable, tenet of project management.