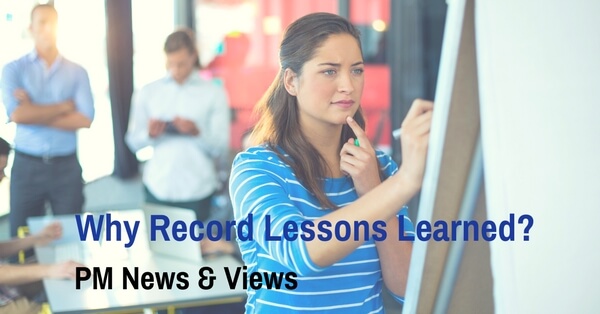 In projects, it is a good practice to document ‘lessons learned’. These are things we have discovered to do – or not do – to make our projects stronger. For example, we may have learned to order supplies earlier, to have team meetings in the mornings, or to print reports to give to the sponsor.

According to the PMBOK (Project Management Body of Knowledge), lessons learned are: “The knowledge gained during a project which shows how project events were addressed or should be addressed in the future with the purpose of improving future performance.”

Documenting lessons learned benefits our current project, and ours and other’s future projects.

Lessons learned are often gathered by teams in end-of-phase or project closing meetings. Like any facilitated meeting, it is useful to have a meeting leader and someone who records the discussion for these meetings.

Another way to gather these lessons is through a shared document, for example, a Google document. Using such a document allows team members to input the lessons learned as they occur. I can say this is one lesson I have learned: to not leave documentation to the end of the week or the month, but to record things as closely to their occurrence as possible.

It’s not just the fact of having the lessons learned for later use that makes them so important; it’s not even just the getting together of the team to record them, or the ability of team members to provide input to project processes. It is the positive outlook generated in the team by knowing the project is continuously looking for improvements – looking ‘on the bright side’, you might say.

After all, projects are for learning.